Showing posts from 2015
Show All

Christmas Calm after the Chaos 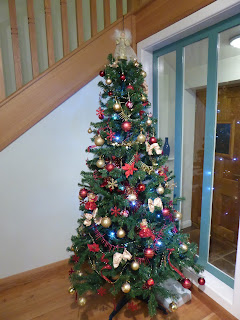 There were memories of pre-retirement days this week when I suddenly woke up to the realisation that Christmas was fast creeping up on us and there was rather a lot of mundane stuff to get through in readiness for our various visitors. I am pleased to report, however, that there must be something about years of working to court timetables, because everything has pretty much slotted into place: the study is decorated and refurbished; the menus are planned and ingredients purchased; the house has finally been cleaned; the beds are made and finally, this evening, the tree has been decorated. I confess that 8pm on Christmas Eve might have been the latest ever in the history of the Risover household  for the adornment of the tree but it is now done and all to the tune of Jingle Bells and Let it Snow. It took until Monday to feel anything like normal again after being knocked out for what feels like most of December. However, I am pleased to report that I returned to Pilates and Yoga
2 comments
Read more

Now He Tells Me 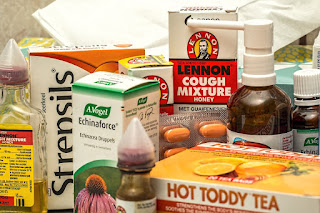 We have been back at home for 10 days and save for a slow walk to the Parish Council's noticeboard which now comes under my charge , I have not been out. Indeed I spent the first 4 days in bed, which has to be some kind of record for me exceeding, I suspect, even the time spent there with measles in my childhood.  The last time I recall being knocked sideways by a cold like this one, it originated abroad too, in that case by way of present from Baku in Azerbaijan. Whilst I would normally consider myself to be a fit and healthy specimen of humanity, unfortunately it seems that I must concede that such immunity as I possess is of no effect against foreign viruses. This has caused a slight hiccup to plans for December, as we have stripped our study ready to decorate. We are now on a very tight schedule to complete the job so that the books, paper and other paraphernalia now spread all over our living and dining rooms, can be safely returned, together with the new furni
3 comments
Read more 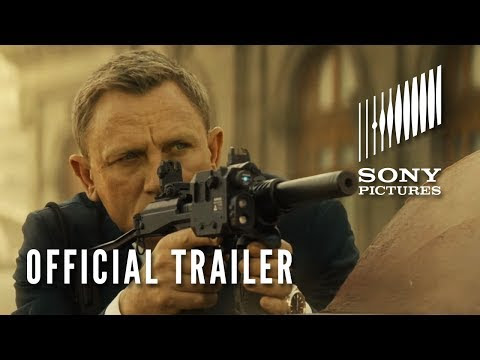 - December 10, 2015
Before we left for India we went to see the new James Bond film, " Spectre ." I am not always a fan of 007 films but I did enjoy this one, especially as it drew various ends from previous films together and at the same time was full of all the high points that make a good Bond movie, not least the humour. I'm not sure if you are meant to laugh out loud at some of the antics but our cinema audience certainly did. I am reliably informed that Daniel Craig is the Bond actor with more Martinis per film than kisses, and perhaps that added to Spectre's appeal. The daily newspapers in India clearly suggested a huge fan base for the films there although it seems that  Indian audiences are not treated  to the whole film as Bond's passionate embraces have been reduced by 50% in order to ascribe to it the equivalent of our 12A certificate.  Also some of the language which, compared to many films, I did not find too offensive, has been altered. Thus in India, &quo
Post a Comment
Read more 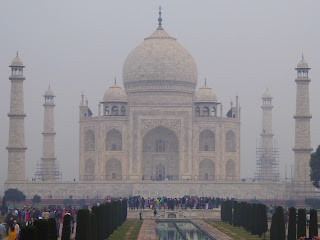 It is hard to do justice in describing the attraction of India. It is a country where vibrancy hits you in the face and makes your head reel. More than 1.35 billion people, many dressed in a brightly coloured sari or salwar kameez, a vast array of wildlife, magnificent temples and wonderful scenery. There's constant background noise whether of people, birds, machines or honking horns. Every direction you look there is something that catches your eye, so different to home that you are entranced, captivated and amazed. Camels help pull loads or plough fields; monkeys chatter on street corners; whole families travel on one motor-cycle or alternatively pile into a vehicle with friends too and like everywhere in the world, women work hard whilst men operate the gadgets. Everything is different and very much happening right in front of you with people bathing in tubs off the highway, sleeping on the steps of the mosque or beside the road; eating their meals
6 comments
Read more 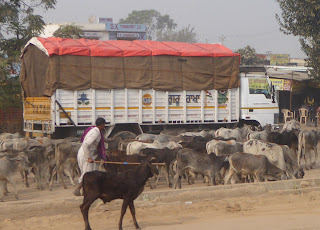 A few weeks ago I wrote a post which I headed, " Is Travelling Really Brutal? " I can now confirm, sincerely, that it is. Into my fifth day of bed rest following our return from India on Wednesday, I am suffering from the rewards of travel: a foreign common cold or influenza virus, I assume, and for which I have no inbuilt immunity. Forget the typhoid, cholera, diphtheria, tetanus, hepatitis and other inoculations with which we protect ourselves in order to travel; perhaps what I really ought to have had was a flu jab. Mister E had his and has fought his affliction with considerably more success than me. When I visited our surgery, I received a typhoid booster and declined the offer of an injection against rabies. I guess the tell tale signs were there in Delhi when I began to suffer from a sore throat. However, in a city now notorious for the worst air pollution in the world, the itchy throat, red eyes and sneezing all seemed at one with breathing in the a
2 comments
Read more 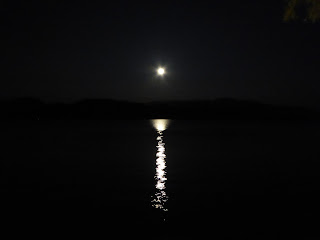 In these harrowing times of explosions, shootings, war and terrorism, it is easy to carry the miseries of the world on your shoulders. Add climate change and sustainability to the mix and the problems of the planet weigh heavily. It has therefore been a relief to become Parish Clerk and realise that what keeps the local community and fellow citizens awake at night is not always the prospect of invading ISIL warriors nor even of strange beings from Mars, but rather: The turning off of street lighting after midnight; Dogs fouling on public footpaths; Drivers speeding or illegally parking their motor cars. It is good to get a local perspective on the issues of our time.
Post a Comment
Read more 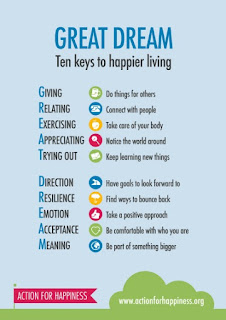 I have just discovered the Action for Happiness' website . Reading its pages has to bring a smile to anyone's face. However the page that caught my attention is labelled 10 Keys and on it are set out ten keys to happiness. I can't believe that since retiring I have been on a journey of self discovery in which I have succeeded in identifying almost all those aspects of life; instead all I needed to have done was to read this website! Still now that I have found it, I am delighted to note that I have been on the right track all along, no wonder retirement is proceeding so happily! The Action for Happiness whose patron is the Dalai Lama has an impressive Board of Directors committed to helping people take practical steps for a happier and more caring world. In so doing, and using Great Dream as an acronym, we learn from them that:  Giving or doing things for others makes us feel better too. I sense more commitment to my voluntary causes, family and friends com
Post a Comment
Read more 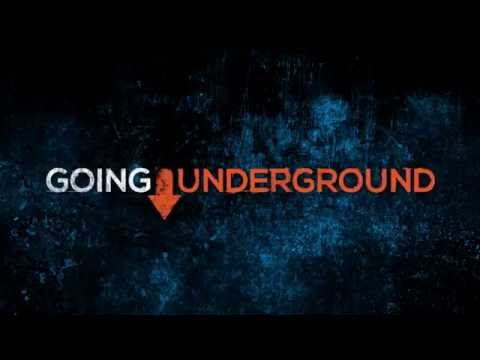 The Situation is Getting Worse - Save the Children  Yemen, You Tube With Syria and the refugee crisis grabbing newspaper space for what seems like months now, when I became a voluntary Community champion for Save the Children it came as something of a shock to me (as I'm sure it will to most people) to realise that the biggest humanitarian crisis in the world today is probably in Yemen. Pulverised by a bloody civil war and now the infiltration of Al Quaeda and ISIS, it is subject to a commercial blockade that is preventing effective aid reaching those who need it most at a time when it is estimated that 80% of the population are reliant on organisations like Save The Children and the UN for food and health care. Prior to the conflict Yemen was already the poorest nation in the Middle East but the statistics are now horrific. It is estimated that:  21.1 million people are in need of aid and 9.9 million children are affected 12.8 million people do not even have access
Post a Comment
Read more 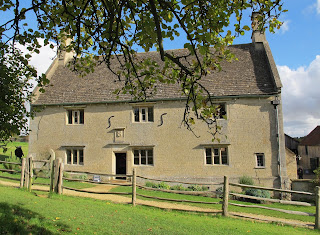 Back in September I was explaining how our limited use of National Trust membership was causing Mister E and me to query whether or not to continue with it. I am delighted to say, however, that whilst journeying around East Anglia we must have visited the equivalent of a year's worth of properties. I ndeed on route to Norfolk, we took a break just off the A1 near Grantham in order to visit the childhood home of Isaac Newton at Woolsthorpe Manor. The apple season is of course, in full season in October so what better time to call as it was in the orchard here that Newton is reputed to have had his Eureka moment with gravity as well as conducting his experiments to split light. The tour around the house does not take long, but it was one of the most informative that I have visited with an introductory film in one of the farm outbuildings and, in another, hands on activities  seeking to demonstrate Newton's Laws of Motion and other discoveries. Moving on to Wisbech in C
1 comment
Read more 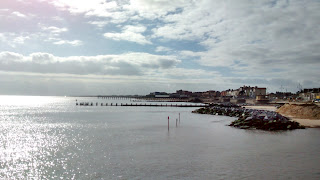 Proceeding down the coast, Lowestoft, the most easterly place in the United Kingdom, was our first stop in Suffolk.  Like so many former fishing ports, it has obviously known better times but, as the birthplace of Benjamin Britten, musical fountains outside the tourist office, choreographed to spray to a background of his music, were a pleasant touch. It has two piers of which the South Pier, adjacent to the river entrance, had only recently re-opened whilst the Claremont Pier remains closed on its seaward side, as does part of the Blue Flag Beach for repairs to the sea wall to be carried  out. The elegance of the Victorian resort of Southwold,  dominated by its lighthouse and  with the famous beach huts (we noted one for sale at £90,000!) and bustling pier, restored since our last visit,  was in marked contrast to Lowestoft . However, for sheer solitude, Dunwich, a thriving seaport from Roman times until the 14th Century when it was destroyed and swal
Post a Comment
Read more
More posts