Showing posts from March, 2017
Show All 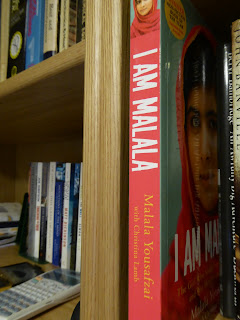 This week I read " I Am Malala ," gaining an insight into the growth of the influence of the Taliban in the Swat Valley in Pakistan, culminating in the shooting of Malala Yousafzai. We are hearing so much about the growth of populism in the West that sometimes one needs to be reminded that the political situation is far more dire in other parts of the world. The populace that could least afford it readily parted with cash and jewellery initially in the mistaken belief that the Taliban would bring about much needed change and so alleviate the difficulties under which they were living. Illiterate and uneducated people, suffering as a result of a lack of action by politicians and disinterest as to their plight, actually thought the Taliban might improve their lot. Malala is, of course, described as the girl who stood up for education and was shot by the Taliban . After my visit to Runnymede the previous week, it was probably a fitting book to read. King John, forc
6 comments
Read more

Losing My Marbles and Other Things 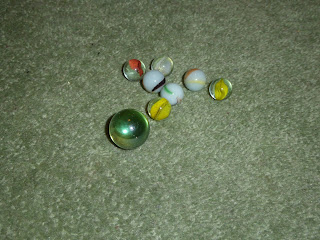 I have experienced a difficult few days when my joy at becoming a scatty being has been offset by the realisation that this is not the state of nirvana I have been seeking in retirement . To throw away years spent honing my organisational skills and memory capacity is not the pot of gold at the end of the rainbow after all . I may be searching for a simpler life but this does not mean I also want a simpler mind. Terrifyingly, in my quest for simplification, I may just have overdone it. It all started, like the birth of modern democaracy, at Runnymede. In the process of taking one of a number of photographs, I failed to realise that I had dropped my camera case. Half a mile later the omission registered, steps were retraced and the bag was retrieved from the damp grass on which it was lying. Never satisfied, however, I excelled myself the following morning. I must confess that I do have a previous history where hotel room key cards are concerned. Consequently I have vo
8 comments
Read more 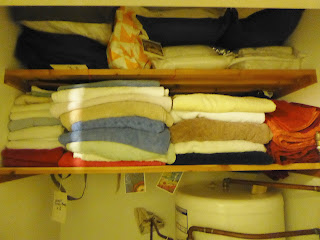 In the twilight of my working years, I began to accumulate a list of jobs that I thought I would leave until retirement. Obviously there were the mega tasks like decorating but there were also any number of simple chores and whilst, in an initial wave of enthusiasm, I may have cleaned the iron and screwed a wobbly handle or two back on, I confess that, almost three years on, for the most part the list remains to be tackled.  "Life's too short to stuff a mushroom," (per Shirley Conran) remains my mantra even on Planet Retirement. However, today I notched up a significant success. I kid you not but for the first time in a decade, I finally cleaned, sorted and tidied the airing cupboard. Moreover OCD got the better of me and I bagged and labelled duvets, pillows, and bed linen not used on a daily  basis. In the course of an afternoon, the cupboard went from chaotic muddle to methodical order. One small step indeed but it really does represent a giant leap fo
6 comments
Read more
More posts