Showing posts from September, 2016
Show All

Letting Go and Making a Difference

Three months into my third year of retirement and it is good to realise just how far I have come. Reflecting on the period of time that has passed, I can now look  back and recognise three different phases. They are not separate or distinct; the boundary between them ebbs and flows but there is nevertheless an obvious progression. The early days, weeks and months were a time for healing and recovery. An opportunity to relax and to take the first steps towards a new healthier, fitter self. There may still be some way to go but the pattern has been set. Gradually and alongside those baby steps from enervation to vigour grew a sense of letting go. Like healing and recovery, it manifests itself on two levels: the physical and the mental. The clutter from both house and mind is being dissipated. Life is simpler; the habits of a working existence have been dropped. Activities and commitments have altered. Although there remains much to clear out especially of a
3 comments
Read more 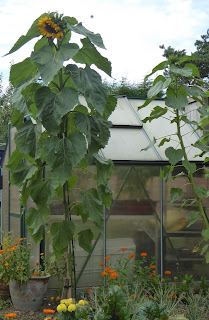 There's something about sunflowers and I have of course blogged about them before, here and here . Maybe it's the challenge of growing them or just the huge flower heads that appeal. Either way I am turning into a goofy idiot who enjoys staring and giggling at them. This year I have grown giant beasts and although they have been late to flower I can now report that they are finally in bloom atop what resemble mighty bean stalks almost twice my height. Little wonder I am transfixed and smiling. In the hope that you might participate in the enjoyment, I thought the one pictured was worth sharing.
Post a Comment
Read more 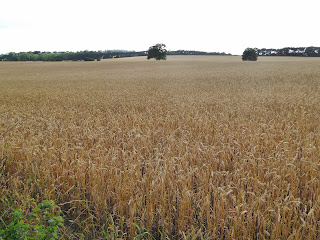 The view around us at the moment is illustrative of the season; late summer mellowing into autumn and all around us the harvest coming home. Indeed in the last week I have dug up and stored  the remainder of the potato crop whilst continuing to pick beans, tomatoes, lettuce and spring onions not to mention copious buckets of apples. We've also been enjoying some glorious weather although perhaps it was a little premature to hear it being described as an Indian summer. Certainly the local farmers don't have any faith in such a prediction  because they were working through the night to get their cereal crops in. Indeed when we awoke and drew back the curtains this morning there was a haze that seemed to stretch for miles; a rural smog of harvest dust. Unfortunately it had also entered through the open bedroom windows to irritate eyes and nostrils. Peeping in the mirror after a sneezing fit, one eye was bloodshot and remains so. Whilst therefore I might have sought
2 comments
Read more

- September 02, 2016
The natural world was thrown aside in favour of car chases and violence this week when we went to see "Jason Bourne," the newly released sequel to the four previous films based on Robert Ludlum's books. Matt Damon gave his all again returning to a role that this time smacked of Bond without the dress suits and one liners but which easily matched Shwarzenegger in Conan the Barbarian for testosterone and bare chests. I checked my watch only twice during the showing; a reputable indicator of either the film's entertainment value or Damon's pectoral muscles. When I returned home I switched on my PC to be greeted by the usual swathe of newsfeed advertising. One was a curious promotion that proclaimed: " Live longer by avoiding men."  I do fear this so-called intelligent advertising. Usually it is so stupid that it invariably pushes items that I have already ordered online. Sometimes however it seems to spookily read my thoughts or more likely a rec
Post a Comment
Read more
More posts