Showing posts from September, 2020
Show All

Escape to the Lighthouse 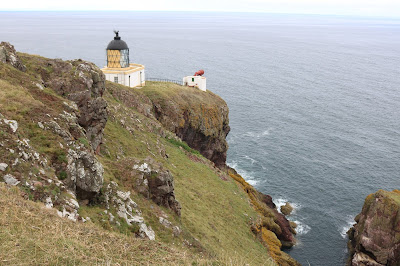 If your dream covid escape involves a boat trip out to a rocky isle, we could not quite manage that last week. Instead, our vacation to a lighthouse keeper's cottage required the navigation of a narrow single track lane of some one and three quarter  miles in length with plenty of bends and sheer drops but very few passing places. Who would have thought that a dry land commute could be quite so exciting? It also beats queuing at an airport check-in, any day.   Deprived of this year's sailing season, seeing the sea was itself a novelty. Perched on a cliff on St Abb's Head in the Scottish Borders, we were suitably remote and our days were spent walking along the cliffs in both directions, including to St Abb's Harbour and beyond.   As the cottage was not part of the light itself, there was no circular staircase to negotiate and fortuitously, despite a vivid premonition of sleeping under a stroboscope, our bedroom window was not affected by the flashing light. Exploring on
2 comments
Read more 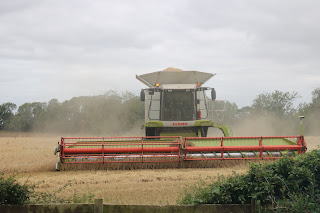 It's that time of year again, or so I was reminded when I went into the garden to be confronted by an enormous combine harvester bearing down towards me. Choking on the dust from the grain and sneezing incessantly, I dashed inside to escape. The next day the farmer returned and everything was neatly baled before being safely gathered in, two days later. Life in the vegetable patch isn't quite as mechanical, but I have been digging over the sunken beds that are empty, adding compost and tucking them up for the winter with a layer of weed suppressing fabric. I've also been doing a bit of gathering in on my own account, collecting the last of the beans, courgettes, peppers and cucumbers, although the tomatoes seem keen to go on and on for the time being. Yesterday found me harvesting lavender or to be precise its dried out flowers, after spotting a recommendation by way of variation to my porridge bathing . Briefly, I mixed oats and lavender, added essential lavender oil and
2 comments
Read more

I am a Sloth 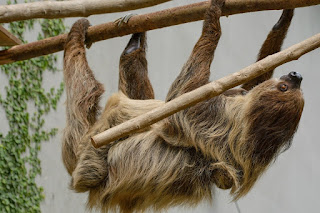 Image by rus33333 from Pixabay                                                                       I am a sloth! Typing it out might make me feel as though I am writing lines for some demented pedagogue, but sadly this week the cap very much fits.  Perhaps I'm just having one of those intermittent down periods that retirement frequently brings; a week where you need to recharge your batteries and re-evaluate plans before setting off again with breakneck speed into the distant yonder. Alternatively it could be that I am the product of months of restrictions, collapsing into a lethargic heap with the weight of them. I haven't done a YouTube exercise class for a week now and my efforts in the garden have been pretty much limited to watering the pots and hanging baskets. I have declined to the point of doing one thing a day, ignoring my To Do List and at a total loss to understand where the rest of the time has gone. So on Tuesday I hosted the good ladies from Reading Group in t
2 comments
Read more

Confessions of an Arsonist 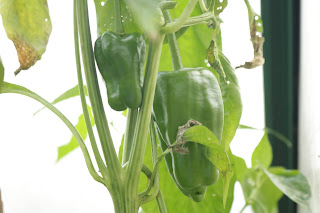 Our favourite Spanish Tapas dish is definitely Padron Peppers; those small, green peppers fried in olive oil and served covered in flakes of sea salt. I'm salivating as I describe them. They are usually mild to the taste but occasionally you place one in your mouth to find it tingles as if chewing a chilli pepper; it's a game of chance or Russian roulette. Mister E and I enjoy them so much that in recent years I have taken to growing them in the greenhouse. The success of the crop varies from year to year. This year I planted 10 seeds and all grew into substantial plants bearing healthy peppers. Perhaps we should have harvested them earlier or maybe it was the specific combination of heat, light and water that they received, but this year finding a mild one is like looking for a white cat in a snowstorm. Some of us have less sensitive mouths than others, so whilst Mister E can tuck them away regardless and the youngest one or two a sitting, I sampled only one initially and tw
5 comments
Read more 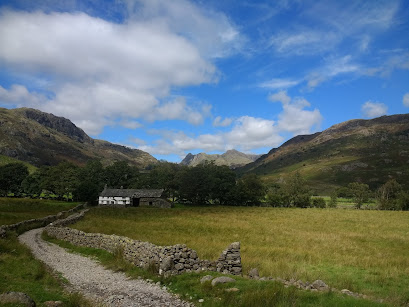 We have returned from a week in the Lake District, primarily spent walking. It seemed very busy, overflowing with all those people who would in other circumstances have been in France or on the Costa del Sol. With heavy rain before and during our visit, there was no easy escape, only sodden hills with poor visibility. Instead everyone was on the lower walks; a vast melting pot of individuals from all over the UK and even the world I assume from listening to some of the languages spoken.   You really wouldn't expect social distancing in the countryside to be so difficult; after all we have been practising it quite successfully in our own local area since March. To see a total disregard for the personal space of others, however, was something of an eye-opener, although the youngest just shrugged and advised me it has been the same in London for weeks. I can well imagine after dropping down into the village of Grasmere at one point. The pavements were heaving and cafes appeared to b
4 comments
Read more
More posts